The Trust for Public Land just released its 2014 ParkScore Index, rating the park systems of 60 of the largest cities in the U.S.. Boston--and its nearly 5000 acres of park space--took home third place, just behind Minneapolis and New York (and tied with San Francisco and Portland). 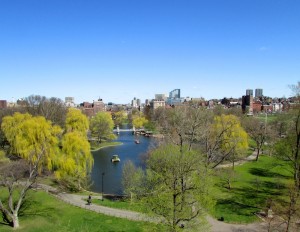 "Boston's open spaces have always been a priority for our neighborhoods," said Mayor Martin J. Walsh.  "I'm pleased with our ranking and I know we will continue to strive to have the nation's number one park system.  I'm proud that we are a leader in access to parks, with 97 percent of residents living within 10 minutes of a park, allowing Bostonians the opportunity to easily enjoy our public open spaces."

ParkScore ratings are based equally on three factors: park access, which measures the percentage of residents living within a 10-minute walk of a park (approximately ½-mile); park size, which is based on a city's median park size and the percentage of total city area dedicated to parks; and services and investment, which combines the number of playgrounds per 10,000 city residents and per capita park spending.